I had the strangest sensation earlier (it might have been the hallucination of a pre-wake dream) that April was almost over, and we were barreling toward September. A kind of grand perspective of the year, a notion that with four months down, it really isn’t that far until most of the year is gone, and then not much further until all of it is. And in that thought, it occurred to me that the year is really only made up of days, and it doesn’t take much for a day to go by without consequence – so that by extension, the rest of the year can go by without us really even being aware of it.

Time is a strange beast, gnawing away daily at our lives until there’s nothing left. Even into the minutes that make up the day, they can pass like treacle – so slow that you hardly notice, and it seems an endless moment until something else happens – or they can fly by like the Flash circling Superman. For example, I woke up around 8 AM this morning, and I didn’t have to leave for work until around 11:15 AM. That’s a lot of time to do stuff – theoretically. Here’s how my morning played out:

And trust me, I almost didn’t write this post – mainly because I couldn’t think of what to write. I was lying in bed, cozy and warm under the covers but wide awake, and thinking to myself: What on earth should I do now? It was one of those moments where it felt like I had all the time in the world, and nothing to do with it.

But the scary part about that is that the attitude of “there’s plenty of time” is also what leads to lost time. A kind of procrastinator’s curse, if you will. It’s one thing if you put off until tomorrow in order to get something else done, but when you put off something in order to get nothing done, not only does it feel like you’ve wasted your time, but it also feels as though you’re wasting your future time, knowing that you’ll now have to do something when you might not really have the time to do it.

For what it’s worth, I’m not saying that having a warm, cozy morning nap is a waste of time; sometimes it’s exactly what you need. I’m no stranger to self-care, and dealing with mental illness most of my life has taught me that I really do need that ‘me-time’ – at least from time to time. But this morning was different; I wasn’t feeling depressed, stressed, anxious, or really anything negative at all. Instead, I think what happened is I fell into a routine, a habit that has spawned out of the need for sleep and self-care, which led me to, if not ‘waste’ time, at least not use it productively. I could have done any number of things this morning, and I actually would have felt like doing them. But I didn’t.

This sort of philosophy, this kind of behavior that I know I fall prey to really quite frequently, I think, is why I feel like time is slipping away. The more I think about it, the more I wonder how many months – perhaps even years – of my life I could have back had I not spent them sleeping, or moping, or feeling like there was no point doing anything. Not that any of that was really under my control – depression is a real villain, sometimes – but it makes me wonder if, for example, The Redemption of Erâth would be complete by now if I was some other person. Or perhaps I would be further ahead in my career at work.

All of it amounts to the thought that my life is really very limited, and having lived through a decent chunk of it already – all of which is time I’ll never get back – I worry that there isn’t enough of it left. I mean, I could die tomorrow, of course, but assuming nothing untoward happens to me, I still only have maybe four or five decades left. Which, right now, sounds like a lot. But I know me, and I know that I’m going to wake up one day and find that I’m actually old, and that I’ve wasted my life.

Maybe this is all coming across as a kind of midlife crisis rant, and perhaps that’s exactly what it is. I’m certainly not here to commit to ‘doing better’, or not wasting my life anymore, but at the same time, I’m very conscious that every day that goes by without an accomplishment – however small – is a day I’ll never get back.

So here’s my accomplishment for today: I wrote this post. Perhaps no one will read it, but if you do, let me know what you think about life, and time, and whether sleeping the day away counts as a waste. I’d love to hear your thoughts! 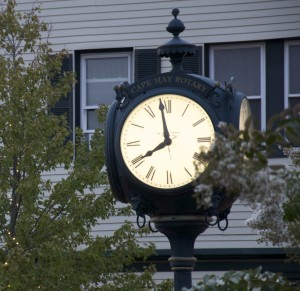 Damn it…look at the time!

I’m not fond of Time, for a number of reasons, the primary being that, like money, there isn’t ever quite enough of it. I’m not fond of money, either. (Actually, I rather enjoy money a lot — I just resent it for not being in my pocket.)

Time pops up in the oddest places, and at the oddest…um, times. My birthday is this month, which is always an unhappy reminder that I’m a year further from my youth, and a year closer to my death. It also gives me a chance to reflect on what exactly I’ve done with the past year of my life. Usually, it turns out, not a lot.

I’m reminded of Time when I drive, or when I cook. I’ve come to the conclusion that microwave and car clocks cannot run to time. It’s clearly a fundamental law of the universe. It doesn’t matter how often I set and reset them; within a few weeks, they will both be out by minutes. In every car. On every microwave. A part of me suspects relativity; we all know that as one approaches the speed of light, the faster time passes in the universe around us. So when I’m driving eighty miles an hour (a significant fraction of the speed of light), the world around me has lived a few extra seconds. Compounded over several weeks, it could explain why my car’s clock is always wrong. What about the microwave, you ask? The answer should be obvious: cosmic rays.

There are endless reams of literature on the nature of Time; whether it is finite or infinite, whether it’s continuous or discrete; whether there’s some fundamental, universal unit of time, and why the atomic clock in Berlin isn’t, actually, quite right. I’m going to leave most of that to Stephen Hawking. I would be interested, however, to know whether he’s figured out a way to pack more hours into a day.

This is, probably, my biggest gripe with Time. Why, oh why, are there only twenty-four hours in a day? Especially since I really want to spend most of them sleeping? Couldn’t there be thirty, or forty, hours in a day? And no, don’t bother pointing out that if you made the hour shorter, you’d get more of them in; the universe just doesn’t work that way. Ask Stephen Hawking.

Well, now it comes down to the heart of the matter. There ought to be eight hours left there. So where did they go? It certainly doesn’t feel like they were used for anything terribly productive. Does it take eight hours to eat breakfast and brush your teeth? I suppose dinner has to sneak in there. Bit of bed time reading, maybe some blogging…my point is, nothing that ought to take up eight hours. Eight long, lonesome, missing hours. I feel like I’ve abandoned them.

But while the absence of time will probably remain a mystery to me, I do have the past year to look back on, and reflect that, maybe those eight hours did in fact creep their sneaky way into my life, because it suddenly feels like I’ve got an awful lot done. I started a blog, which has now been going for slightly over a year. Over 6,000 people have stopped by to say hello. I’ve made some good friends in the process.

I’ve begun the process of getting my book published.

I got blown about in a hurricane.

And I did some other, less important stuff, like spend Time with my family.

Perhaps I’ll never know exactly where Time went. But if it keeps coming back now and then, I suppose I can’t complain.

Thanks for taking the time to read this. I do apologize, but I’m not able to refund it at the moment. All complaints should be addressed to Stephen Hawking. 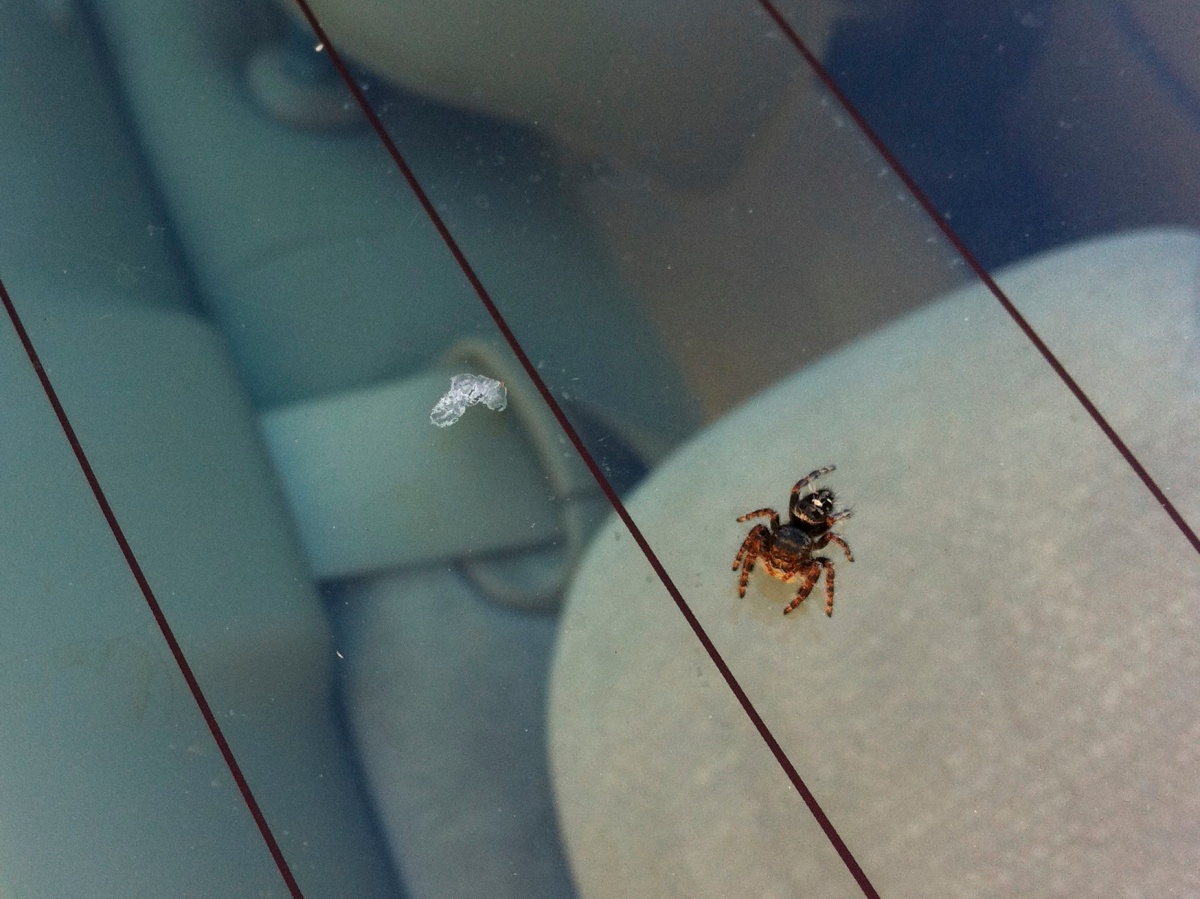 The spider that defied time and space.

I found this little guy on the back of our car, and was struck by his movements. He moved his legs so fast that my eye wasn’t able to register it. As he walked, it quite literally looked as though his legs simply appeared, instantly, in a new spot. It really got me to wondering what time felt like for the spider, and whether he thought I was moving impossibly slowly.