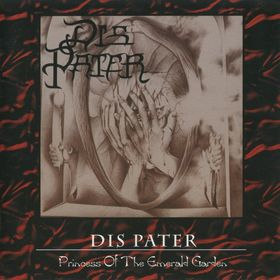 I’ve been playing a lot with music streaming services like Spotify and Apple Music lately, and it’s been a wonderful experience to hear new music wash over my ears like endless floodwaters. No longer do I need to save up, buy albums, wait to download … anything I could ever want is at my fingertips.

While mainstream bands (mainstream for me) like Opeth and Sonata Arctica share their latest releases consistently on Apple Music, some bands aren’t so fortunate to have major labels that will promote them. One band I’m quite fond of, The Fall of Every Season, don’t have a Wikipedia page, and have only recently come to streaming services like Apple Music and Spotify.

But then there are bands who don’t even make it that far. One I came across quite some time ago is a Russian doom metal band called Dis Pater. They released a full-length album in 2003, Princess of the Emerald Garden, before disappearing again until recently. Last year they released their follow-up Beautiful Utopia—a gap of twelve years between albums.

And listening to Beautiful Utopia reminded me of how much I enjoyed Princess of the Emerald Garden, and why I appreciate underground music as much as I do. None of their music is available through any form of online streaming service, nor can you buy their albums on Amazon. They are only available to download directly from their website, and this is in some ways disappointing, because no one will ever discover them this way.

Princess of the Emerald Garden is a classic, haunting doom metal album, complete with dreary clean vocals, harsh death growls, heavy distortion and melodic piano. The second track, Emerald Garden, in particular has a fantastic, flowing quality to it, keeping pace throughout and mixing clean with death vocals and acoustic with heavy guitars, leading to a beautifully understated conclusion. Flutes come in with A Distant Flute’s Weeping, and the album itself is lengthy but well-paced, ending with the gloriously dismal Genesis.

Oddly, their follow-up, Beautiful Utopia, feels like a step backward, at least production-wise. But then, with no sales to boost their budget, it’s perhaps not surprising that they aren’t recording in state-of-the-art studios. What impresses me the most about Dis Pater, however, is the clear passion for music that is expressed through their songs. Nothing is terribly original or anything I haven’t heard before, but to have so clean a sound with what seems to be such a low budget, I’m reminded of some of the bands that started the heavy metal genre such as Black Sabbath, and how they equally were driven by their passion for music, and not their passion for sales.

Download these two albums if you can, and experience a wonderful trip through doom-laden Russia!