Imagination is an exceptionally powerful thing. It is how we decide; how we play; how we learn. Even those of us who would claim to suffer from a poor imagination nonetheless exercise it on a daily basis: if you’re trying to decide which way to go home, you are essentially imagining which way is going to be best.

But sadly, the imagination often stops at these limited, practical uses. As children, our imaginations were with us. Our companion, our best friend, our life outside of life, imagination was the key that unlocked doors to a world more real and infinite than our own.* And as we grow older, and our lives become overwhelmed by those practical things, our imagination dwindles. We can console ourselves that we still read, that we watch thoughtful and engaging television, but that is really a poor substitute.

This is not to say that we have to act like children (well Einstein did, but look where he got us). All it really takes is a willingness to stop, to think, and to look beyond the surface.

I’m as guilty of this as anybody. I recently shared some photos of gravestones I took. This was one of my favorites: 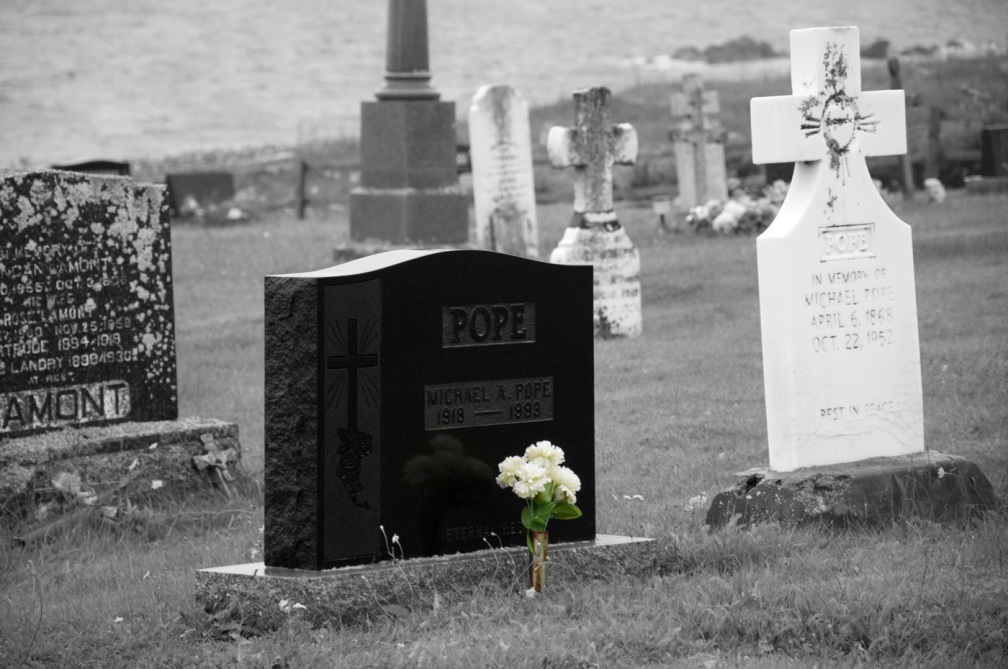 I took the picture because I thought the gravestone looked interesting. I was caught by the flowers, and so I took the snap. For a while, it was my favorite simply because of the composition, the way that the image lent itself to colorized black and white, and the hint of further graves behind.

And then, after I’d been working on this picture for some time, I actually stopped to read the epitaph. It reads:

And then I started thinking about what this meant. The remains of a man lay beneath this stone. That man’s name was Michael; perhaps he went by Mike. Mike was a boy, once; his childhood might have been good, or it might have been terrible: he was eleven when the stock market crashed and threw the world into one of the worst economic depressions the world has ever seen.

Mike was twenty-one when World War II began; it’s likely he was drafted to fight. There is quite the possibility that Mike has killed people. How did that affect him for the rest of his life?

Mike knew someone else in his family; another Michael Pope – perhaps his father. Mike was thirty-four when this Michael died. This Michael himself was an astonishing ninety-four when he died. Think how incredible that is; when Michael Pope Sr. was ten, there was no such thing as radio. When he died, there was color TV, rock music, two wars whose tragic repercussions lasted long beyond his own life; there were even prototypical computers, though he might never have heard of them.

Our Mike was only seventy-five when he died in 1993. That’s not young, but it’s not old. Why didn’t he live as long as his father? Did he contract pneumonia? Did he suffer from dementia, or alzheimer’s disease? Perhaps he simply fell of a ladder. At some point, Mike took a final breath, and never breathed again. Who was with him when that happened? Maybe he knew his death was coming; maybe he never got to say goodbye to his family.

Of course, Mike might never have had any further family; there are no other Popes interred here. But there is one thing that feels certain: someone loved him very, very much. Someone loved him enough to commemorate him with a black marble gravestone. Someone who, twenty years later, still visits his grave to leave flowers.

* Children these days suffer from a world that stifles the growth of their own imagination. For your children’s sakes, don’t let them while away their childhood with video games and television; from time to time, send them outside with a stick.

13 thoughts on “The Devil’s Details: The Tragedy of a Wasted Imagination”