It’s so easy these days to create legible writing using a computer keyboard that it’s easy to let legible handwriting fall by the wayside. I have become such a typist that I can’t actually remember how to write in cursive:

I haven’t written in cursive since the fourth grade.

I did need to write by hand of course throughout school, and when push came to shove I found I could print faster than I could write (cursive). It’s still not anything I’m terribly proud of, but at least I can (mostly) keep it in a straight line:

“This is an example of my handwriting at its neatest.” For those who still can’t read it.

My history exams came out looking a bit like that bottom line. There was a kid in that class who could write ten pages in the time I wrote two…he got an A.

Now Little Satis has been having quite some difficulty forming letters, and his handwriting is difficult to read at its best. If he’s patient and takes his time he can actually write quite well, but he’s eight. The odd thing is how he has learned (or taught himself) to write:

Rather than starting at the top, he starts every letter at the bottom, and traces it up from there. This particularly causes problems with descenders, since they too start on the line, and not below it:

“Qountem and the Apocalypse Theif”, for those who are struggling. Don’t ask.

However, although his handwriting is in dire need of attention, check out the F: 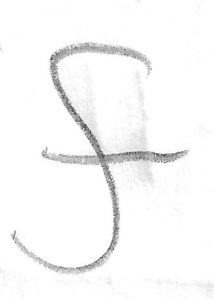 What a lovely F!

Isn’t it pretty? How did that come out of…well, that?