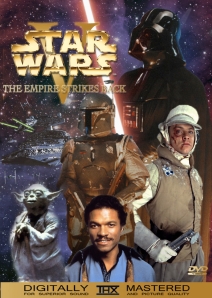 All right…I’m a bit of a Star Wars fan(atic). Nothing adventurous this week for Little Satis and I, just good, old-fashioned fun.

We’d been talking about Star Wars in the car (specifically about Star Wars music), and were humming different theme tunes to each other. I stumped him with the asteroid chase music (you know: dum, dum-dum-dum, da-dum, dum), and this brought us onto The Empire Strikes Back, and frankly, there wasn’t any more question about it.

It’s interesting to watch these movies with the consideration of all that’s come after. Most die-hard Star Wars aficionados will claim that The Empire Strikes Back is the defining film; the one that epitomizes Star Wars in all its glory. It’s hard not to agree; the bigger budget compared to A New Hope paved the way for some spectacular special effects, and the story became quite rich in dynamics, without pandering (as some will say Return of the Jedi does). In particular, having just been reminiscing about the asteroid chase scene, I was particularly keen to relive this, and twenty-two years later it still stands up. The unrefined, authentic realism of the early Star Wars movies is untouchable by the CGI eye-candy of the prequels. A part that stands out to me is when Han rides his Tauntaun into the hangar bay on Hoth. The senses are flooded with the sights of a busy mechanic’s garage: welders, sparks, smoke; debris scattered on the ground; all of these qualities that are utterly missing from almost any modern film, and especially the prequels.

However, another thing that stood out to me with the knowledge of the prequels (and the extensive Star Wars literature) is the surprising consistency between the stories of twenty-five years ago and today. People are quick to point out the plot discrepancies, but I find there is far more continuity than one might think. This is particularly evident in the dialog between Yoda, Ben and Luke as Luke struggles to decide whether to help his friends or not. They tell Luke that he still can’t control the force, that he will be tempted by its ease to use the dark side to defeat Vader. When I first watched this (and many times following), this always seemed like fairly generic philosophical banality. Now, however, it suddenly takes on a much deeper meaning. Yoda tells Luke that if he truly believes in the cause Leia and Han fight for, then he would let them die. Luke is unable to break his emotional attachment to his friends, and rushes in regardless. This is exactly the same behavior we see with Anakin; his emotional attachment to Padmé blinds him to the corruption that is befalling him.

It’s curious, really, how well these things fit together. Given that over twenty years passed between the releases of Episode IV and Episode I, George Lucas either quite genuinely had the three prequels in mind at the time, or he deliberately left historic events vague enough that the prequels could tie into them. There are discrepancies, yes; Ben says that Yoda trained him, while we know that in fact, Qui-Gon Jin was mainly responsible for Obi-Wan’s Jedi training. But the whole ties together wonderfully well.

Ultimately, I still feel that The Empire Strikes Back is the quintessential Star Wars. The rawness of A New Hope lends to it a timeless quality anyway; Return of the Jedi pushed the effects of the time to their limits, and delivered a highly-polished Hollywood blockbuster. The Phantom Menace, The Attack of the Clones and Revenge of the Sith, despite their many shortcomings, actually delve much deeper into the history and intrigue of the Star Wars world, and paints an exceptionally realistic portrayal of the downfall of an entire civilization into tyranny. But The Empire Strikes Back remains the one where everything just suddenly fit together. The characters gel seamlessly, the plot flows uninterruptedly, and, of course, we get an awesome asteroid chase scene. It also contains one of the best, most relevant pieces of wisdom not just of Star Wars, but of perhaps any film at all:

Luke: I don’t believe it.

Yoda: That is why you fail.