In a dark, cold apartment, two young men stare at the small box in front of them. One, at least, is clearly very afraid. The box must never be opened, one says. We must, the other replies. And so they do.

Moments later, a man and a woman burst in. One man is found in a closet – burned to ash. The other, cowering in the bath. The woman takes the box, and in cold blood kills him.

Jack Fender used to be a renowned photographer, famous for his stark black and white style, and the subtle eroticism of his work. Used to. Three years ago, his wife – his soulmate and his muse – committed suicide. Now he shoots soft porn. Locked off and dead to the world, Jack wanders around in a haze, filled with the dark visions of his wife’s final moments. Then one day, nearly run down in the street, he witnesses the fatal car crash of the woman who took the box. With her dying breath, she bids him to take it, and never to look upon it. And he does.

And then – emptying his mind late one night at the pool – he meets Iona. And she listens to him. She speaks to him. And finally, she breaks through to him. They become close, and they begin to love…and after so long, his muse returns. Slowly, his creativity returns, and he begins to feel that he might finally be able to leave the demons behind him. 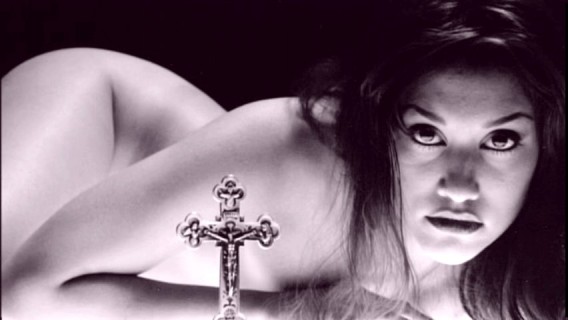 Little does he know that the demons are, in fact, yet to come, lying in wait. As the darkness closes in around him, he begins to realize that Iona may not be all she seems – and the powers of evil are intent on the contents of the box. As everything he knows comes crashing down, he discovers the box holds an ancient and unimaginably powerful relic: the holy grail. And the terrible visions that continue to fill his mind hold an even darker secret from his past.

Cup of My Blood is not a great movie. Mediocrely acted, poorly color-graded and uncomfortably scripted, it is a low-budget B-movie in every possible sense of the word. Yet the editing is strong, and it manages nonetheless to be both visually striking and stylistically unsettling. It is graphic, violent and disturbing, mysterious and frightening, and ultimately charts an artist’s descent into madness in the face of unspeakable horror. Had it had a bigger budget and better actors, it could have been a significant film. As it stands, it’s a visceral depiction of sex and death, haunted by despair.

Some of you may find this film disturbing or upsetting; some of you may simply laugh at it. Either way, approach it with caution: it isn’t as simple as it appears.