It’s taken me quite some time to get around to this post; I intended to write it up almost a month ago, but photos are an integral part of what I wish to share, and it’s taken me quite some time to sort through them. From the 2,000+ that I returned with, I culled it down to 666 (heh heh), and from that a collection of 154 personal favorites. I won’t be sharing every single one of them in this post, but you can see the whole set here.

Earlier this year, one lazy Saturday afternoon when the clouds were dark and the rain heavy, we stumbled upon a little-known film called The Song Spinner. It was based on an eponymous book by Pauline Le Bel. It’s a beautiful and darkly mystic tale of a country ruled by silence: any sort of noise is gravely punished. The movie was stark in its portrayal of this; eerily quiet, there is no score, and the characters quite genuinely speak throughout in hushed whispers. Only one girl, Aurora, hears the wonder of music in her own head, and yearns desperately to be able to voice her melodies. When she meets a mysterious old lady who secretly encourages this song, the stage is set for a beautiful and inspiring change across all of the kingdom.

Anyway, as enchanting as the movie was, even more so was the filming location: snow-swept plains, a cobblestoned village, rustic and desolate. Utterly taken by this incredible scenery, we looked up where it was filmed, and discovered the distant Louisbourg Fortress, on the far tip of Nova Scotia, Canada. Only about…twenty hours from where we live. Well; there was suddenly no question of where we were to go this summer.

A Bellefonte Duck. She knows she’s in a special place!

However, our journey turned out to be far more epic than that. Over the course of two weeks, we travelled over 4,000 miles, through twelve states and two countries. Our first stop was my mother’s home in Kentucky. Little Satis had been spending the summer there with her, and we were to pick him up. We spent only a couple of days there before setting off once more. Our next destination was Cape May, New Jersey, to spend a day or two on the beach. What fun! But first, we stopped at a little town we discovered last year and fell in love with: Bellefonte, Pennsylvania. This charming little victorian town is nestled next to a small river, and is filled with beautiful buildings, lovely shops, and a small park by the stream that is simply overflowing with ducks.

The sun sets over the Cape May beaches.

From here it was off to Cape May. We had booked a small bed and breakfast last year, but were forced to cancel due to the inconvenience of hurricane Irene (stupid tropical storms). We’d not been to Cape May before, but my anxiety was unfounded – it was every bit as lovely as we had been told. Though it was a fairly traditional east coast seaside town, the water was warm and the beaches clean…just right for sandcastles! The sunset, despite being on the wrong side of the beach, was beautiful nonetheless. 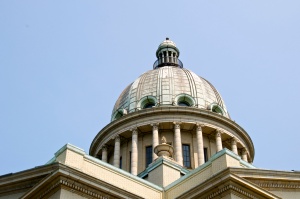 One of the fabulous examples of victorian architecture in Providence, RI.

We spent only a night here: our trip was far from over. Onwards we pushed, up, up to Rhode Island, and the small town of Providence. It was an odd town, Providence; not nearly as gracious as we had expected, being almost run off the road by an impatient twerp in a pickup four times the size of our car. Still, despite the stress of that evening, we realized the next morning that we were on the doorstep of Brown University, and here was the charm we had been missing. Once more a town built in ages past, we were surrounded by old brick homes and towering architecture. Crime rates aside, if I were to go back to school, it might well be here. 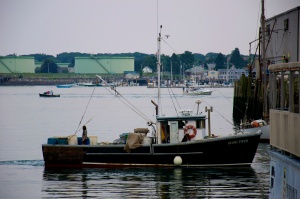 The Irish Piper puts in to port.

Not satisfied with one town that day, we rampaged our way further up the coast, passing through Connecticut, Massachusetts and New Hampshire to arrive in Portland, Maine, just before a delightful storm drenched the best lobster dinner we had ever – ever – had. Portland, I verily fell in love with; an old world fishing port, it was awash with the sea and the salt and the grumblings of genuine bonafide sea dogs! I have an hopeless attraction to the old and run down (in the most positive sense of that phrase…), and Portland fulfilled me in every way.

Sadly, we were only to stay there one evening, for now it was time for the true push: northwards, up and onwards to Canada, and Nova Scotia. We spent the night in a town called Moncton, on the border of New Brunswick and Nova Scotia, but I have little to say: we didn’t like it much at all! 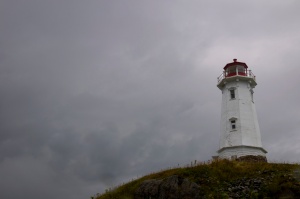 The dark and dramatic lighthouse of Louisbourg.

And so, on the tenth day of our monumental trip, we arrived, finally, in Louisbourg, Nova Scotia, and the beauty of that rugged, windswept land was more than we could have hoped for. Three days, we spent, traveling, visiting, and seeing all that could be seen. (We had plans to see whales on the third day, but the wind didn’t seem to care and cancelled all the outings that day.)

We spent our first day under cloud and rain, and wandered the locality of Louisbourg proper. We visited an aging, disused lighthouse, atop a heightened crag, from where we could look across the sea and spy the fortress, lost within the mist. 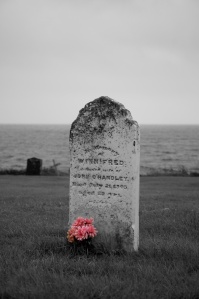 Desolate graves at the edge of the land.

The weather being what it was, it was only fitting that we stop by the local graveyard (something I have a bit of an obsession about); it was heartbreaking to see four headstones in a row, bearing the same name from over two hundred years ago; some unhappy accident or disease claiming the lives of an entire family.

Further in keeping with the drear of the day, we visited a colliery– led into the abysmal depths by a miner of over forty years, we breathlessly learned of the horrors of mining at the turn of the century. Throughout  the harshest winter, in a climate where your very eyelids could freeze shut, entire villages of miners were kept at ransom by the mining companies: paid less than they could live off of, they were kept in permanent debt, owing their very lives to the company. Every man, without fail, was expected to work every day: if one should fall ill, they would have no choice but to send their sons. If they did not, they would be turned out from their home, and left to starve and freeze to death.

Imagine living in these depths sixteen hours a day, seven days a week.

On the second day of our stay, the weather improved, and we finally, after so many months of waiting, arrived at the reason for our entire voyage: Louisbourg Fortress. A French colonial fortress, it stands on the edge of the sea, preserved perfectly for over two hundred years. Populated by an entire village’s worth of period actors, you are transported verily to the heart of the nineteenth century. Somehow they manage to pull this off with grace; from the live cannon fire to the delicious stew served in pewter, we were taken away to a different world. Even the very children gathered caterpillars in bonnets and breeches, and the gardens were tended by a lovely old man who removed his three-corned hat to speak to my wife. 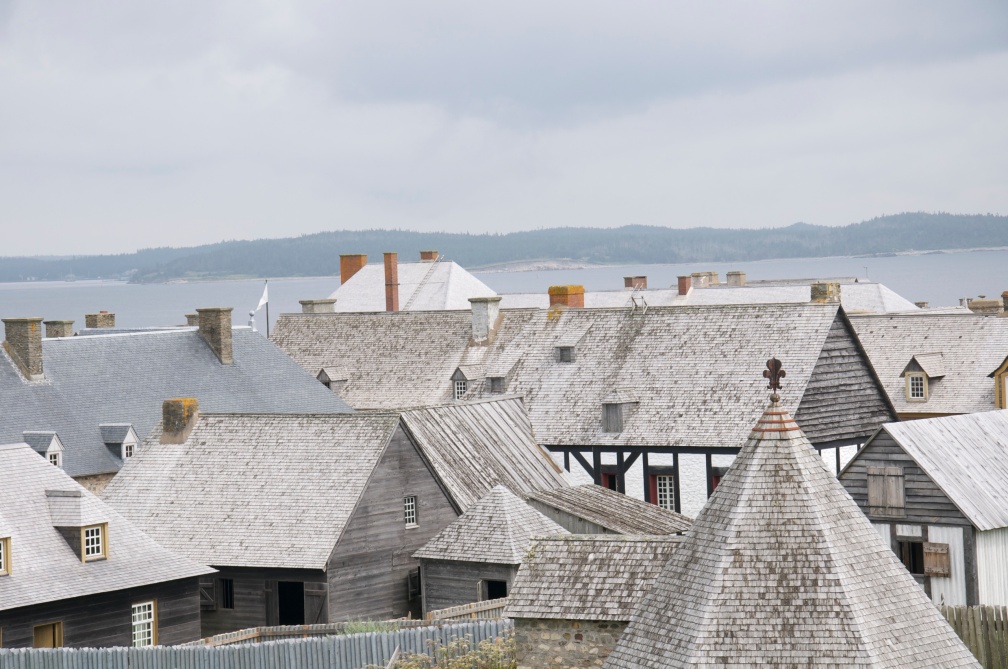 The ancient rooftops of a great fortress.

The place is grand: in the morning-to-night time we spent there, we were unable to visit every corner of the living fortress. In every building and courtyard were thrills and delights, from weaving lace to tending sheep, and the ever gracious townsfolk were more than willing to show you how to help. Little Satis spent about twenty minutes at lace (threading precisely one stitch), and even discovered an entire room filled with period toys (took a while to leave that one!). 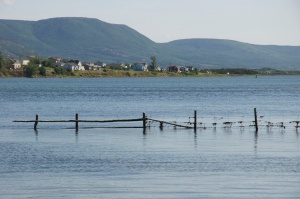 The sea near Chéticamp, along the Cabot Trail.

It is a wonderful experience, and I urge any who plan to visit this part of the world to take part in their daily lives. Sadly, we could not stay, though on our final day we drove the length of the Cabot Trail: a 300-mile costal path that passes to the northern-most tip of Cape Breton and back again. It was here that we were treated to simply the most stunning, breathtaking scenery; of all the places I have been in this world, I can think of nowhere else that could surpass it for sheer beauty. The azure seas, deep blue skies, and all the vivid hues of trees and grass and rock come together to rise you above the ground, and place you verily at the ending of the world.

Can you imagine such a breathtakingly beautiful view?

It was a bittersweet moment when time came to leave; we stopped little on our return, heading home with beauty and longing in our hearts. It is a long way from home – but I would not hesitate for a moment to return.