I dreamt of Harry Potter the other night. I certainly wasn’t expecting to, but I’m hardly surprised: Little Satis and I are two-thirds of the way through Harry Potter and the Deathly Hallows, and had to skip a few nights’ reading due to my working late. I guess we’re both getting a little obsessed. 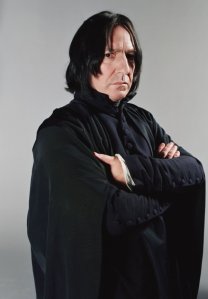 Yes, I understand Snape somehow redeems himself…but I don’t know how, so don’t spoil it!

I don’t remember the dream terribly well anymore (you know how dreams tend to get fuzzy after a while), but it involved me being at Hogwarts and chasing after Severus Snape with the sword of Gryffindor. It was entertaining, to say the least. Hogwarts was (in my dream) a glorious old castle hung with red and gold drapes – something straight out of a medieval-set film – and I do recall marching into a great dining hall, the sword at my side, tall and confident and pointing my wand straight at Snape. I don’t remember what happened after that, but I suspect he probably cursed me into oblivion.

Strictly speaking, I understand that humans probably dream every night – multiple dreams each night, too – but we simply don’t remember them. If we’re surprised during our sleep, shocked awake, as it were, we’re more likely to remember them. Even so, the power of our dream images tends to fade rapidly, dwindling into oblivion in only a few minutes.

Every once in a while, though, there are dreams that stay with us for a very long time – sometimes even forever. A year or two ago I had a dream for the plot of a book. I even dreamed the title: The Girl Who Killed Herself in Apartment 615. I wrote down some of the details that I could remember, and I still believe I could turn this into a compelling novella, should I ever be done with The Redemption of Erâth and A Gothic Symphony. I remember a few specific scenes in particular – nothing too graphic, actually, but specifically being in an apartment or flat in a high-rise building and looking up at a glass balcony, which was part of the apartment above yet somehow descended into my own apartment. There were pillows and discarded clothes strewn everywhere, and out of sight amongst the detritus was the dead girl. The entire thing was utterly surreal, and the story would take place in a bizarre, hellish alternate reality. Some of the chapter/section titles are The Dream that Won’t Wake Up, Passing Time in the Four Pits, and The Sculpture that Changed. Weird, huh? 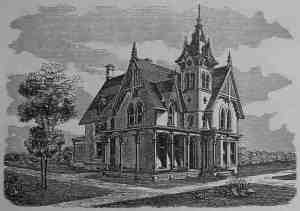 My dream house? Maybe with trees all around…

By far the most vivid, longest-lasting dream I’ve ever had, though, was over ten years ago. I remember scenes from it today as though I just woke up: it was of a house, lost deep in the woods. My family and I had been walking through a forest, and though the woods were innocuous enough, the entire setting was after a nightmarish apocalypse. We weren’t in the woods for fun, but for survival. We then came across an old, abandoned mansion. The closest thing I can come to describing it is a sort of Munster’s house, complete with a little tower at the top, spiked trimming on the eaves and dusty wooden floors inside. I remember going up to the top of the tower, a little room with windows all around, and looking out at the surrounding trees. I then remember looking back down the stairs, and all of a sudden a great, overwhelming darkness came flooding up the stairs and engulfed me entirely, strangling and drowning me…and then I woke up.

I can still see that house in my mind, sharp as it has ever been. I’ve convinced myself that this house must exist somewhere – it was incredibly eerie to wake up from. I haven’t found it yet, though if you know where it is, let me know – I’ll buy it, for any cost!

What dreams have stayed with you?