If I post in advance, I can’t get in trouble for forgetting!

Aren’t I a sweet husband? At least one day a year.

I’m not sure how this happened to be the 13th of February, but it was that year’s Valentine’s Day breakfast. I didn’t have a mold for heart-shaped pancakes, so I made one out of paper and foil. It barely held together, and almost caught fire. 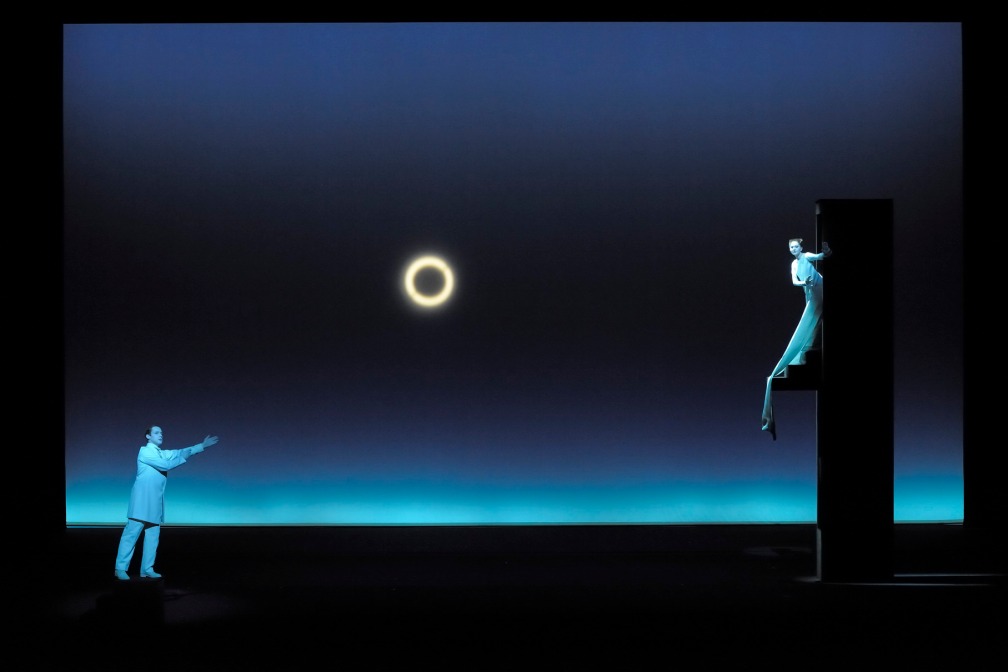 Love incites bitterness; revenge leads to death, and the world descends into madness. From the chaos is birthed the new, the pure, and the harmonious. And so the cycle continues.

The symbolists of the late nineteenth century were consumed with the goal of depicting the world not in itself, but as a representation of a deeper meaning, of dreams and ideals; life, and love, and death. In painting, angels, demons and death abounded, uniting love, death and despair. A beautiful example of this is Carlos Schwabe‘s La Mort du Fossoyeur (The Death of the Gravedigger). An angel – not white, but dark – looks upon the old man, deep within the grave he has dug for himself. The world is cold and frozen, blanketed in pure snow, and as the angel’s wings curl around the man, ready to bear him hence, she lights a green flame in the palm of her hand, the unearthly glow lighting her face. The angel is death, and transformation; the man is of the weary and aging world, longing to be taken from his agony.

It was against this symbolic background that Maurice Maeterlinck wrote the tragic play Pélleas et Mélisande – a tale of darkness and doomed love. Goulaud, a prince of Allemonde, discovers a young girl by a stream in the woods, lost and afraid, with no memory of who she is, but for her name: Mélisande. Goulaud falls in love with the girl, and they are soon wed in secret. Despite his fear that his grandfather, named Arkël and ailing king of Allemonde, would not approve, word eventually reaches him via Pélleas, who is Goulaud’s brother. Arkël would have his grandson return home nonetheless, and is smitten by the beautiful girl, and gives the couple his blessing.

Soon, though, Mélisande discovers a deep love for Pélleas, and the two begin to spend ever more time with each other. Deep in the woods, Mélisande loses her wedding ring in a well; fearful to tell Goulaud the truth, she tells him it was lost in a dark grotto. He bids her retrieve the ring, and again Pélleas accompanies her, providing her comfort in the terrifying darkness.

Growing ever suspicious, Goulaud brings a warning upon his brother: deep under the castle, he leads him to a great chasm, and darkly tells him to beware: Mélisande is with child, and is not to be his.

Yet Pélleas and Mélisande cannot deny their love, and in a desperate attempt to save her, Pélleas tells her he must leave, lest they bring Goulaud’s wrath upon them. But even as he departs, Goulaud confronts Mélisande, and in his anger, casts her violently to the ground. In tears, she flees in search of Pélleas, determined to be with him one last time. Once more deep within the woods, they meet and embrace in love – unaware that Goulaud had followed her. Descending upon them in fury, Goulaud runs through his own brother, and in casting him lifeless to the ground, deeply wounds his own bride.

Growing now ever weaker, Mélisande gives birth prematurely to a daughter; upon seeing her face, she bids the nurse to take her away from her, as she is nothing but tragedy to her. And so, in tears, she dies also.

Throughout the play, the story is rife with symbolism. In flirting with Pélleas, Mélisande loses her wedding ring – an symbol of the infidelity to come. The strength of women is also implicit in the grief their loss wreaks upon their men. Arkël, king of Allemonde, has lost his own wife; Goulaud is a widower when he discovers Mélisande; and of course, he brings the death of his second wife, Mélisande, upon her himself.

Maurice believed firmly in the cycle of destruction and rebirth; Eros, mythical god of love, and Anteros, his counterpart as the god of revenge, are at the heart of Pélleas et Mélisande. In the great darkness, love is slowly dying; the kingdom is ravaged by famine, waters are foul, and death surrounds our characters. In seeking forbidden love, Pélleas and Mélisande culminate this, and revenge is visited upon all, now leaving the world ready to begin again.

Pélleas et Mélisande has been influential since in a number of media; best known are Claude Debussy‘s opera, and Jean Sibelius‘ incidental suite. This latter is a wonderful musical journey of beauty and tragedy; I would highly recommend discovering and listening to this masterpiece.