So, instead of writing recently I’ve been playing around with MacFamilyTree, which is a pretty neat genealogy application (I’m sure there are equivalents for Windows). Not only does it let you add in mothers, fathers, partners, brothers and sisters, but it then tells you the relationship between all these people, gives you plausibility warnings (e.g. if someone was married two years after they were born), and gives you the person’s age at time of death.

But—I haven’t been doing this for my own family. Nor for my wife’s. I’ve actually been creating a family tree … for the families in The Redemption of Erâth. The two major families involved are Brandyé’s and Elven’s, the Tolkaïs and the Dotterys (there are numerous others, but these are the two main characters). So far I’ve plotted three generations of Dotterys, four of Tolkaïs, and for Queen Gwendolyn, I’ve traced as far back as her great-great-great-grandmother. 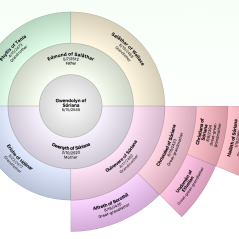 This has led to some interesting discoveries (I say discoveries as if I wasn’t making this up as I went along): for example, Brandyé has a cousin similar in age to himself! Elven is now related to royalty, and there are more aunts and uncles involved that I’d ever suspected.

In this regard, here are the five most curious things I’ve discovered while making these trees:

While this has been a fascinating endeavor, it has taken away from my actual writing, in which I’m trying to complete the third book before the end of the year. So for now, I may be leaving the genealogy alone, although it’s an intriguing subject–even for fictional characters!