Our family moved house recently, and the other day I took Little Satis to the new local library for the first time. (Actually, I’m ashamed to admit that it was one of the first times he’s been in a library at all, other than at school; we get most of our books from Amazon.) I had ulterior motives, of course – I wanted to see if they’d stock The Redemption of Erâth: Consolation! But aside from that, we signed ourselves up and started to browse.

It turns out that at ten, Little Satis is far beyond the children’s section, and so we moved upstairs to the young adult/teen section, where he looked for some more books by Rick Riordan, being utterly obsessed with the Percy Jackson series. (We watched the first Percy Jackson movie the other day, incidentally; I wasn’t terribly impressed.) Being the open-minded adult that I am (and not caring what I chose for him, since he’s the one who’d be reading it), I started looking through various titles to see if there was anything new I could interest him in.

“Have I ever steered you wrong (except that one time)?”

The Lightning Thief, by Rick Riordan

This has proven to be a difficult endeavor indeed. As long as I can remember, Little Satis has been bullishly obstinate about refusing to try new literature. He’s the same with movies, too. Every Friday night (more or less), we sit down to watch a movie – ideally one he, and perhaps myself, hasn’t seen yet. Every single time, he balks and whinges at every choice I make, insisting he just wants to watch The Lord of the Rings or Star Wars for the fiftieth time. So far, I’ve made precisely one bad choice: the utterly appalling, not even so-bad-it’s-funny bad, Pirates of Treasure Island. That one was a stinker. Other than that, he has supremely enjoyed every movie we’ve ever watched together, from obvious choices like the Harry Potter series to off-the-wall adventures like Time Bandits and old, dreadfully-dubbed Jackie Chan movies. It’s become a catchphrase in our house: “Have I ever steered you wrong (except that one time)?”

So I was less than surprised when he professed little enthusiasm for the book I picked out for him, Witch & Wizard by James Patterson. Personally I was surprised to find James Patterson, of Alex Cross fame, had written young adult/children’s stories, but despite having never read any of his other works I presumed that, given his enormous popularity, they would be reasonably good. Little Satis thought differently.

He pulled a huff, right there in the middle of the library, and refused to use his own, brand-new library card to check out the book. He flat-out told me he absolutely would not ever read the book. I had to bribe him – I’d buy cookies for dessert if he promised to read at least he first fifty pages. He stalled, saying that he wanted to finish reading Percy Jackson and the Sea of Monsters…for the twelfth time. In the end, I had to threaten not to read any more of Harry Potter and the Deathly Hallows with him at bed time until he tried the book. 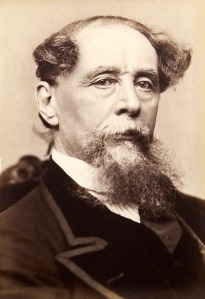 It’s funny, because of course looking back at myself as a child, I was exactly the same. I suspect many of us were; there’s a great comfort in familiarity. I remember re-reading books immediately upon finishing them, over and over again. I remember looking at the title of a new book and screwing up my nose at it. I remember being forced to read Charles Dickens, thinking it must be the most boring literature in the world (Dickens is now my primary literary hero). The thing is, I don’t consciously recall a turning point – a point where I suddenly had a desire to try new things. I feel that it was a struggle, though; something that didn’t necessarily come naturally. And nor will it for Little Satis, and I don’t expect it to. I suppose that’s what our parents are there for: to tell us, “Just try this one – trust me. When have I ever steered you wrong (except that one time)?”

In the end, of course, Little Satis did pick up Witch & Wizard one weekend while I was at work. When I got home, the first thing out of his mouth was something that had happened on page sixty-seven. “What happened to only reading to page fifty?” I asked.

“Dad…” he said with his head down, “Maybe – just maybe – you might have, well, um…been right about this book.”

I guess that’s one thing that’s no easier to say as a child than as an adult.

3 thoughts on “Thought of the Week: The Stubbornness of Children”