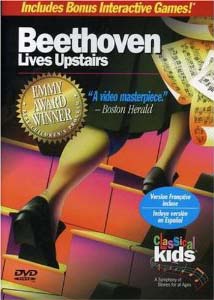 I had forgotten about this movie for so, so long; I can’t believe it’s been over 20 years! As a young classical music snob this was one of my favorite movies, and revisiting it now I can safely say it still is.

The plot is elegant and simple; young Christoph lives in Vienna with his recently widowed mother, and in order to make a living they rent out their upstairs room. It just so happens that their new lodger happens to be a rather well-known figure: Ludwig van Beethoven.

Predictably, Christoph hates Beethoven for taking his father’s place, and for desecrating his father’s study: in his constant madness and compositional furore, Beethoven writes music on any surface he can find – including the walls and the shutters.

Ah – the shutters. Well don’t worry, after I move you can sell them. I’ve heard they demand a good price.

Eventually though, he comes to understand the source of the man’s terrible frustration – to have such beautiful music to write, and be so totally unable to hear it. Christoph’s uncle Kurt helps him to learn the passion behind the man, and the terrible sadness and humiliation Beethoven lives with every single day. Gradually the two become ever closer, culminating in the hair-raising premier of his 9th symphony (one of the most glorious pieces of music ever penned). The triumph, of course, is made bittersweet by the knowledge that he was to die only three years later.

One of the best aspects of this film is that the score is entirely comprised of music by Beethoven – even the peddler and his monkey on the street corner! So great and varied was the output of Beethoven’s life that there was more than enough material to set the atmosphere of any setting, from overwhelming sadness (Allegretto from Symphony no. 7) to fury (Allegro con brio from Symphony no. 5), reminiscence (Für Elise) and light-hearted joviality (Menuet in G).

The performances are, in hindsight, less than perfect; Illya Woloshyn, in particular, feels like a by-rote actor. Neil Munro, however, is surprisingly excellent as the tempestuous and eccentric Beethoven, passing from raving lunacy to gentle tenderness and everything in between.

Little Satis enjoyed it, although I think I enjoyed it more; he very much likes Beethoven’s music (especially the 5th and 9th symphonies), and he certainly learned quite a few things about the man that he hadn’t known before. He gave it three stars, but I’m afraid I’m going to have to give it

There are many princes; there is only one Beethoven!