A few of you may be aware that we were among the many who were affected by Hurricane Sandy as it swept across the west Pacific, decimating the Caribbean and the United States East Coast. We had our fortune in being comparatively unscathed; not fifty miles from us people were dying. We lost power for three days, and even had the luck to retain heating and hot water.

There has been, and will continue to be, endless reports and posts on the destruction of this storm, and with utmost respect to the many who came out worse, I will leave their stories to others. Rather, I’d like to take (only) a moment to write about some small good that has come out of this disaster.

Even this, to be honest, will be of little surprise; whenever there is a terrible natural disaster, we are regaled with tales of both ghastly inhumanity and of heroic self-sacrifice. A police officer in our town was crushed in his car while remaining on duty on Monday night as the winds began to mount, suffering severe spinal injuries. At the same time, people have been cutting past each other, waiting in lines overnight, and fighting amongst themselves in the past few days for a few drops of gasoline.

What happened to us, by comparison, was simple. We lost electricity on Monday night as power lines fell. We lit our candles and went to bed, listening to the powerful rush of the wind outside. The image I won’t forget of this is staring through the windows at the thick, far-distant clouds that surrounded the center of the storm, and seeing intense, stuttering and brilliant flashes high in the sky. They were not white, like lightening, but glowed deeply of gold and crimson. For hours these flashes continued, bright enough to light the room through drawn blinds from dozens of miles away.

Fresh toasted pumpkin seeds; tasty, though I did burn them a little.

Come the morning, a part of our fence had blown down. That was it. We still had no power, and began to consider how to salvage the things that would be thus affected — chiefly food in the freezer and refrigerator. It’s funny how such small things become such a concern when the conveniences that make them possible suddenly evaporate. Of primary concern were the perishables; milk, meat, frozen foods. We lit the stove with matches and began to cook. We made a rather delicious curry the first night; dumplings and spring rolls the second. We carved our pumpkin for Halloween on Wednesday, and toasted the seeds.

Our makeshift backgammon board, complete with paper dice.

What struck me during this period is that suddenly, with no television or computers or internet, we were together. My wife and I cooked together, and cooked well. Both of our jobs were shut down, and so we had all the time we needed, yet were under a time constraint nonetheless — that of the sun. We needed to begin dinner by 4:00 PM, or it would be too dark to see. We ate by 5:00 PM each night, lighting the candles as dinner finished, and would then retire to the living room. We lit the fire, and sat together, reading or talking or playing. I taught Little Satis card games, and backgammon with pennies and a board I drew on a sheet of paper. 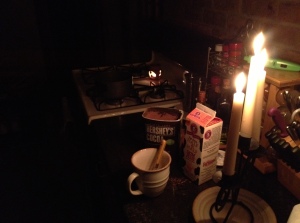 Hot chocolate by candlelight — the perfect way to use up milk!

For the first time in a long time, we spent time together as a family, genuine, undistracted time. Time when we could talk to each other, and share ideas. My wife suggested s’mores, and it was a messy delight to roast marshmallows in a fire that I couldn’t keep going. Before bed, I read to Little Satis not in bed, but before the dying embers, candles my only light.

There was something quite magical about it. For three days, I suddenly felt as though a huge weight had been lifted from my shoulders. Despite missing all of you, the simpleness of waking with the sun, spending the daylight only in business, eating at sundown and being in bed by 9:00 PM was entirely refreshing. In fact, I became quite depressed when on Thursday afternoon, without warning, our lights flickered back to life. Modern life was back, and I found I didn’t particularly welcome it.

I don’t think I was alone in feeling this. Little Satis spoke to me of how much he enjoyed playing chess and backgammon and cards. Just yesterday, my wife told me that she had felt closer to me during those past few days than she had in some time. Perhaps it will be possible to retain a fragment of that feeling as we move forward into recovering the haste and stress of everyday life, even if it is simply to turn off the television one night a week, and play cards by the fire.

I’m aware of the paltriness of our experiences, compared to those who remain without power or heat, and those who have lost loved ones, but I’m sure we aren’t an isolated case. I’d like to think of it as just a simple, plain example of how a natural disaster can bring people closer together.

3 thoughts on “Thought of the Week: How Sandy Helped Our Family”