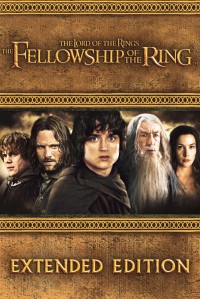 Part two leads off from the Council of Elrond, through the passage over Caradhras and the mines of Moria, the stay with the elves in Lothlorien, and ultimately the sacrifice of Boromir and the breaking of the fellowship.

Frodo carries on the journey begun in the Shire, and more than ever, we see him begin to realize the danger and power of the ring. Even after Gandalf utters the ring’s inscription in the tongue of Mordor, Boromir of Gondor still tries to convince the council to allow his country to use it as a weapon. Gimli attempts to destroy it to no avail, and even when, through the tension, the council agrees that it must be destroyed at Mount Doom, a bitter argument breaks out over who is to be responsible for its destruction. We see Frodo, watching from the background, witness the mounting enmity through flames reflected in the ring itself. It is in the midst of this that he realizes his fate: he is to carry the ring to its final destruction, or his.

This is a thought that is reinforced throughout the remainder of the film; the fear Frodo has in allowing others to touch the ring (first seen when Boromir retrieves the fallen ring in the snow of Caradhras) bears witness to this, and it is reinforced when he talks with the Lady Galadriel in Lothlorien. Having witnessed the loss of Gandalf in Moria, and bearing the guilt of that loss with him, he realizes he can no longer bring peril to the remainder of the Fellowship: his decision is made.

You are a Ring-bearer, Frodo. To bear a Ring of Power is to be alone.

It is of course not until the end of the film that Frodo finds the courage to do so; it takes the betrayal of Boromir, and the evidence of the ring’s maddening effect on those around him, to finally convince him. We see him leave; see Boromir find his redemption, and accept his king; we see Merry and Pippin captured by the uruk-hai. The stage is set for the following two films.

It is not the first time Little Satis and I have watched The Lord of the Rings (not even the extended edition), but each time he observes further details, and now is pointing out things I had not seen myself, or at least had not noticed. He made the distinction tonight between the goblins of Moria, the orcs of Mordor, and the uruk-hai of Saruman. Apparently the uruk-hai are seen only in the first two films; the assault on Minas Tirith is made by a combined army of orcs and men, but there are no uruk-hai. He thought perhaps this was the failing of Sauron; the uruk-hai were fewer, but were stronger. Had he had an army of ten thousand uruk-hai to storm the white city, the outcome might have been quite different.

I can’t wait to see what other things he notices as we continue with The Two Towers; watching with an eight-year-old is certainly a rewarding experience!