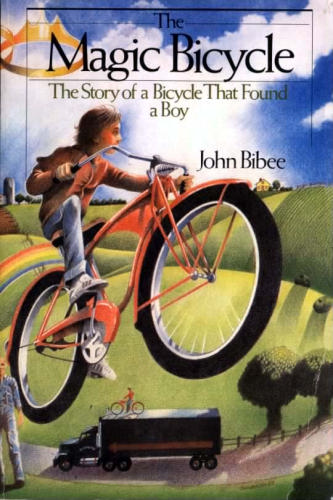 And then, of course, there are the fears that stay with us. The fear of the dark; the fear of the unknown and the inexplicable; the fear of power that is outside of our control. And most of all, there is the fear of things that just don’t quite seem right. These are the things that scare us the most for they look normal, and they behave normally; they walk and talk and appear in every way to be right, and proper – yet somehow, they aren’t. Something lurking in the background tells us their shadow doesn’t sit right, or the light behind their eyes is of an ill color.

Any story that captures some of these elements is bound to be frightening; a children’s tale that touches on all of these fears is outright terrifying – and powerful.

Such is The Magic Bicycle, by John Bibee. This is a tale that, as a child, thrilled, terrified, and enthralled me. I read it endlessly, and each time I was spellbound, shivers dancing across my skin on every page.

Except his parents are dead, and he is raised by his aunt and uncle, and their daughters. He fits right in, of course – they love him as they did his parents, but he knows he isn’t quite part of their world. As it turns out, the bicycle he discovers in the town dump will take him into an entirely different world altogether.

It isn’t a world far removed from his own; he continues to go to school, to do his homework, to be picked on by the school bullies. But slowly, things begin to happen that shouldn’t. The bicycle, it turns out, isn’t an ordinary bicycle. When he pushes down on the handlebars, he discovers it can fly. And as John is discovering the remarkable abilities of his new treasure, men in black bowler hats begin sneaking around at night, offering strange candies to bullies and encouraging them to steal and destroy John’s bicycle. Snakes begin to appear, manifested in skid marks and dark clouds.

Gradually, it becomes clear that a power greater than John is intent on seeing through the destruction of his bicycle, at any cost. And as John begins to learn of the bicycle’s power and the meaning behind it, and the bond it has to his parents, the dark forces move against him, and he is left, alone, to rescue his family from the shadows.

This is the true magic of this tale – John’s remarkable command of his readers, bringing them to the edge of fright, and then helping us to see behind the curtain, and to understand the things that frighten us. Even the forces of evil have weaknesses, even as we do; they can be tempted, frighten, and cast out.

Yet John doesn’t leave us with such a cut-and-dry tale of good and evil; The Magic Bicycle is as much a tale of lost innocence and growing up as it is an adventure of a young boy, and the ending is bittersweet, at best. This is a timeless tale of strength, fear and morality, and it has forever touched my mind.