A young man and a woman live, poor, in the slums of Detroit, deeply and madly in love with each other. They harbor a love of the gothic and the dark, and they plan to wed on Halloween, October 31.

The eve of their vows, there is an attack: their apartment broken into, she is raped, beaten and stabbed. He walks in – desperate, he cries out for her, and she for him. Moments later, he is executed before her eyes. Later, under the blinding glare of flashing blue and red, she dies. The girl she cared for and the cop who found her look at each other, and in a moment, their lives are forever changed.

So begins The Crow, the 1994 film that changed the lives of goth kids around the world, and ended the life of Brandon Lee. I was one of those goth kids, and I first saw The Crow in the bitterest depths of my depression, when I believed all hope had gone. I watched it every night for a month, and shed tears each and every time. There are some, I’m sure, that will see this film as little more than the comic book-inspired action movie that it claims to be, but for me there has always been – and will always be – a far greater depth.

Eric Draven, murdered in cold blood before his beloved’s eyes, is raised from the grave one year later by a solitary crow, his strength and guide in his resurrected afterlife. He has returned, and seeks but one thing: retribution for the tragedy wrought upon his fiancée. One by one, he hunts down the four men who ended their lives, and returns their favor to them.

All the while, Sarah, daughter of a drug-addicted prostitute, has learned to live, and rely, on her own, seldom seeing her mother other than for money for food. Her only companion is the defeated and washed-out cop, Albrecht. Gradually, she comes to know of Eric’s return, and seeks him in the ruins of their old apartment. Though they meet, their friendship cannot be rekindled – he is not living.

There is a tone of utter despair to this film, complete futility; even as he takes revenge upon the monsters that destroyed his life, Eric knows it serves little purpose, for the past cannot be changed. In returning, he has brought nothing but hurt to all those around him, inspiring hope in Sarah and then equally crushing it. From the outset, we know that, even should he succeed, he has still lost: his life remains forever gone, and his beloved forever dead.

There is, naturally, a final dramatic battle between good and evil, ending with the beautifully gruesome death of “Top Dollar” atop a ruined cathedral, and the inspiration of hope with the redemption of Sarah’s mother and the reunion between Eric and his long-lost, ghostly Shelley. The most touching scene for me, however, is the meeting between Eric and Albrecht, in Albrecht’s apartment late at night. Albrecht lived Shelley’s dying moments, and through his eyes Eric lives it also. In a touch, every hour of pain and torment fills Eric’s mind, and he recoils, aghast.

What touches me most about this scene, however (I’m tearing up just writing about it!) is what we learn about Albrecht. Against his career, against his home life, against everything he held dear, he remained with this dying girl, this complete stranger, staying by her side and with her hand, until she died. Knowing it was inevitable.

This movie is infused with darkness and despair, gothic tragedy and loss, and yet holds a human compassion beyond many that I have seen before or since. It was everything I needed, and the tears I shed were a sweet, sweet relief.

It is yet a further, well-known tragic addition to this film that Brandon Lee, son of Bruce Lee and Linda Lee Cadwell, died whilst filming when real bullets were substituted for blanks. As such, the film has become as much a eulogy to this bright and emerging actor as it is a piece of dark, gothic cult art. They say no parent should bury their child, and this film – a piece of trite entertainment, comparatively – proved the most terrible loss a person could ever bear. 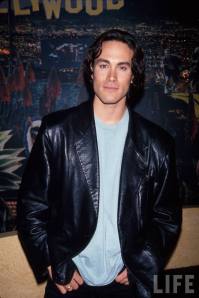 3 thoughts on “Tales of Despair: The Darkness of Crows”