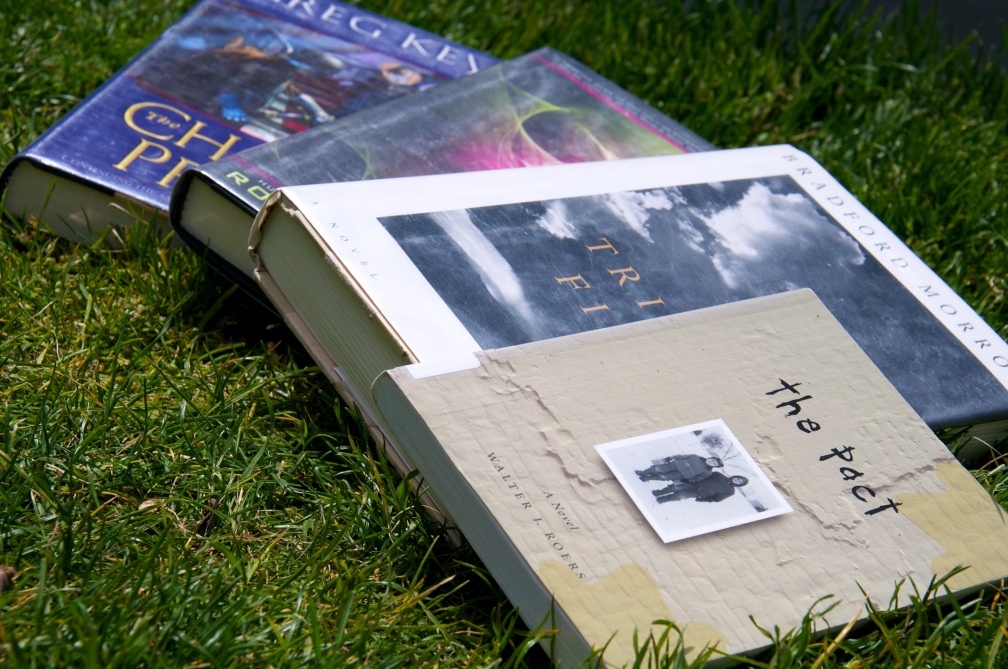 I was on a long weekend to Montauk a little while ago, which was nice enough in its own right; there was a lighthouse that we didn’t go to, a giant golden statue and an office building that had been abandoned since 1930, which we also didn’t go to. We did see a World War II bunker that fell into the ocean, and had a milkshake.

Of course, few libraries are in the habit of charging you for their books, which is fortunate, but most of them ask for them back, which is slightly deceitful of them. In this case, the Hampton Library in Bridgehampton that also serves Sagaponack didn’t seem too bothered about it, and had rather trustingly left them unattended on their front lawn. I actually began to wonder why the books (or at least the donation jar) hadn’t been pinched already, until I remembered we were in the Hamptons, at which point of course I felt a little guilty about pinching them myself. Still, it couldn’t hurt to have a look.

It turned out these books were books the library didn’t have room for anymore, and hadn’t been checked out in at least a year and a half or so. I suppose I should have been worried at that point but we hung around anyway, faithful that the library-goers of the Hamptons probably wouldn’t know a good book if it hit them in the eye, and that a gem (or at the very least some zirconia) might be buried in the pile.

I don’t know if I found any gems. I do know I found four books that at the very least had pleasing titles and covers. This reminded me of choosing an album at a second-hand record store (in this case a second-second-hand book not-store), where I had to pick it based on the cover artwork alone. This used to be a lot of fun, until I’d bought all their good music and was left picking up some really weird stuff like Carter Tutti. These books are:

Something about two brothers growing up in the 1940s with abusive and alcoholic parents. Sounds pretty grim.

Another book about growing up in the 1940s. Funny, that. This time in New Mexico with atomic bombs.

This one sounded interesting, if the author can bring a novel take on the subject: self-propagating intelligence via the internet. All through the eyes of a blind girl, so to speak. Creepy.

This one seemed fun. I actually have to say it sounded vaguely familiar, and it’s supposed to be a sequel to something called The Briar King, in a series called The Kingdoms of Thorn and Bone. Sounds pretty straight-up fantasy, and I’m hoping, after the first three, it’ll prove some light reading.

I haven’t actually started reading any of them yet. Actually, I don’t have much time for reading at all, which is sad because I really don’t mind it. I am working through a book called The Last Death of Tev Chrisini by Jennifer Bresnick, which I hope to review when I’m done, something I’ve never done before so it probably will be a complete train wreck.

What about all of you? Have you read any of these books? Are there any I should start with first? What about ones I shouldn’t bother with? Actually, that would be the most helpful, since I always seem so short on time. Please let me know which of these four books is a complete waste of time.

4 thoughts on “Thought of the Week: Free Books”