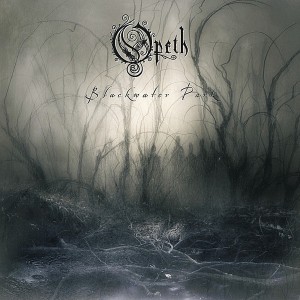 Blackwater Park is the fifth album by Swedish band Opeth, and represents in many ways the pinnacle of their early career. Musically, their style began to vary and diversify greatly after this album, but in many ways, it still represents the perfect place to learn their music, for it forms a bridge – both the culmination of everything they had ever done to that point, and the starting point for every album since.

Opeth began their career as a death metal band in the early 1990’s, releasing their first album, Orchid in 1995. Even here, there was evidence of their trans-genre styles; at a time when death metal was reveling in sonic brutality, Opeth presented a refreshing balance between heavy guitars and beautiful, lullaby-like jazz-inspired acoustic soundscapes. Their second album, Morningrise (1996) pushed further against the genre, including extended sections of jazz improvisation, and finishing with the beautifully sad To Bid You Farewell, a 10-minute ballad with no growls in sight.

While they continued to refine their style over the following two albums (My Arms, Your Hearse and Still Life), it was in 2001, with the release of Blackwater Park, that Opeth genuinely defined their sound. While most bands would have considered this the stopping point, for Opeth it proved merely the jumping-off point – each subsequent album has pushed the boundaries of what defines death metal (and metal in general), with their most recent album, Heritage, shedding all vestiges of their roots, and providing a stunning tribute to the bands of the seventies that had inspired them in the first place.

Blackwater Park opens with a ten-minute track, The Leper Affinity, kicking off the musical journey in a terrifying and exciting manner. Fading in from silence, a massive discord of sound builds to a swell, ever increasing until, with no warning, a shocking and harsh rhythm bursts in, thick chords and fast drumming. Over the top of this, Mikael Åkerfeldt’s guttural and devasting growls push the musical tension forwards until, if possible, the rhythm doubles in speed and moves into the secondary theme. Throughout the exposition, we are treated to a dizzying variety of rapid themes, each building organically from the previous. Then, quite suddenly, the song moves onwards into the development section, taking on the melodies and rhythm of a veritable waltz before, impossibly, giving way to a gorgeous acoustic section, and for the first time we are treated to Åkerfeldt’s stunning singing. Eventually, this leads us further into the development, the heavy guitars kick in again, building to an off-rhythm climax which culminates with a solitary scream leading back into the original opening theme. Just to push the contrast as far as possible, at the tail end of such intensity, the song finishes by petering out into a beautiful, slow jazz piano solo.

This one, single song represents in ten minutes everything there is to know about Opeth. The album progresses on beautifully from there, through a simple and serene ballad in Harvest, a stunning ballad in Dirge for November, and ending finally with the title track, a twelve-minute mammoth which, though starting and ending with heaviness, includes a six-minute acoustic jam right in the middle.

Opeth are an utterly unique band, and their music transcends genres, from metal to jazz to prog rock, and taking into consideration a hefty dose of western classical tradition. Though their subsequent albums have, in musical terms, bested even the mastery of Blackwater Park, this album remains their golden masterpiece – the defining moment in their career when everything that had led to this point was justified, and providing the foundation for everything to come.