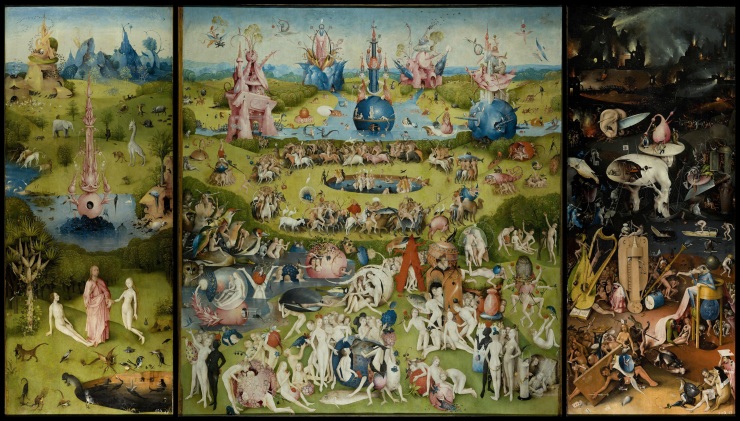 Some time ago, I wrote about discovering Pieter Bruegel’s The Triumph of Death; a vast, melancholic landscape of horror, with the dead come back to drag the living down to hell. He portrays a hopelessness in death – there is no escape: peasant and king, saints and sinners, all succumb.

As I learned about Bruegel‘s fascination with hell, it brought my attention to the one who significantly influenced his style and subject matter: Hieronymus Bosch. From an earlier generation (Hieronymus died around 1516; Pieter wasn’t born until 1525), he was born and raised in the Netherlands to a family of artists: his father and four uncles were all painters, as their father had been also. In this early stage of the European Renaissance, the Netherlands appeared to be more tolerant of the representation of death, demons and hell – with their frankly grotesque, disturbing and often mind-bending caricatures of men and devils, it is easy to imagine his work denounced as heresy, or worse, the influence of the devil himself.

Though there is no reason to believe his childhood was less than ideal, a great fire in his home town when he was but a boy laid waste to thousands of homes. One can only imagine the terror and devastation of a fifteenth-century village, flames spreading from roof to roof, as men valiantly throw water from buckets onto the ever-blackening homes. Caught in the living hell, thousands must have perished, screaming and burned alive. And when all was over, the horror of stepping through the smoldering ruins, blackened and charred bones lying side by side with the beams of houses. From this, it is suddenly easier to imagine the influence for his work.

One of his best-known works today is the seminal Garden of Earthly Delights (doom metal band Cathedral pay wonderful homage on their album, The Garden of Unearthly Delights). It is a monumental piece, a staggering seven feet high and thirteen feet across, oil painted on wood, with hinges that allow it to be folded closed. Thus separated into three parts, Hieronymus dedicated each third to depicting a stage of mankind’s journey from conception to corruption to death. The left-most panel – the simplest, in terms of content – is dedicated to the garden of Eden, replete with newly-made animals, luscious lakes and fields, and azure mountains in the far distance. Orchards and palm trees sway (did they have palm trees in the Netherlands?), and in the foreground, Adam sits, watching as God presents Eve to him, new and pure and virgin.

Even here, the surreal nature of his work can be seen; while some animals are recognizable, others appear as odd or deformed creatures, including three-headed lizards, deformed snakes, and some creatures that are beyond recognition.

The central panel, twice the width of the side panels, is given over to – perhaps – paradise. It is a busy scene, with nude folk cavorting endlessly far into the distance. Here already, the scene is already becoming unsettling; though at first it appears that the beauty of Eden has grown to accommodate the growth of man, there are signs that not all is well.

Not a man or woman can be seen toiling or working, and in their play, there show the signs of corruption, sin and vice. On the left of this panel there are depictions of good; in the far distance, groups of people can be seen entering upon paradise, among the unadulterated animals we know so well. A couple sit side-by-side on a giant pink sculpture, and a man even flies high above the world on the back of a griffin, holding aloft a branch of peace.

Yet as we move along, things begin to run afoul; men have begun to abuse their power over the beasts, riding them for their own pleasures. At the same time, their very pleasures become more bestial, as the eat from the beaks of birds, and appear even to seek congress with fish.

And of course, in the far right the ultimate symbol of sin: man taking the forbidden fruit.

And so we enter the depths of hell, and it is here where Hieronymus’ true talent – and most bizarre and terrifying imaginations – is revealed. From severed feet to living consumption to grotesque violations, every detail is intended to shock and horrify.

In one corner, a man makes love to a pig, while behind him misers defecate money into a cesspit in which further sinners can be seen drowning. Beside them, a hideous demon gropes an unconscious woman, while a donkey looks on.

Elsewhere, musicians are impaled upon their own instruments, and tormented by the demonic music now passing through their ears.

In the center of the panel, a bisected giant forms the setting for the damnation of gluttons and soldiers alike; men are led into a fiery cavern to feast upon embers and ash, below whom tortured souls drown below the frozen waters. To their right, demons impale, imprison and feast upon soldiers – those who would kill for glory.

But it is at the top of this panel, in the darkest and most frightening place imaginable, that the true despair of hell is shown. Lost in dark fog and shadows, the fires of hell burn high, and men are whipped, burned and massacred. Torn limb from limb, they are thrown into rivers or cast into flames, and always new sinners fall from the world above.

Most heartbreaking and tormented, though, of all this, is a tiny detail at the absolute height of hell: behind the terrible black cliffs, the light of salvation glows – forever unattainable. Despite this, a single, solitary man braves the flames and the heights, desperately seeking redemption. And above him, an angel plummets from heaven.