Some time ago, I read an intriguing review by Ash Silverlock over on Fabulous Realms about an author I had never heard of, and a trilogy of books that had somehow passed me by.

It is a rambling tale of gothic masonry, doomed nobility, and isolation. It is a work of literature that, bizarrely, seems to have no journey, no passage; one in which the events are linked not by character or progression, but by the castle:

At least…so I am told. I haven’t read them yet. In fact, I would hand over the task of telling you about to Ash, who described them so well that I was compelled to seek them out. 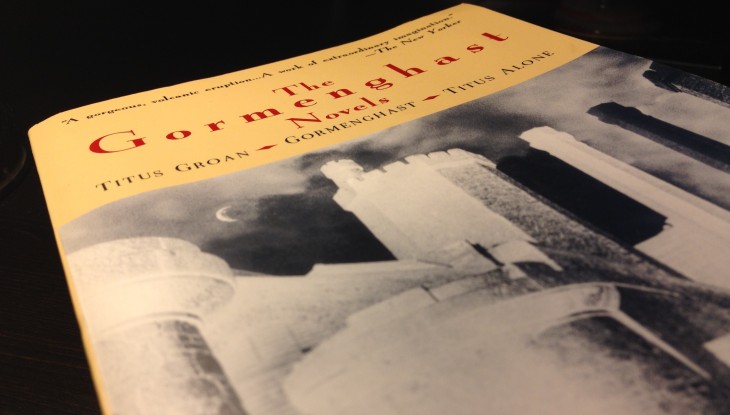 And all I really have to say here is that I have them! I found the complete trilogy for $4.00 in a used book store. I am very excited; here is what people have said on the back of the book:

Mervyn Peake is a finer poet than Edgar Allan Poe…

Peake’s books are an addition to life…

Many readers admire Tolkien’s Lord of the Rings, but fans of Mervyn Peake’s Titus trilogy maintain that this extravagant epic…is the true fantasy classic of our time.

Well…those are some big shoes to fill – I hope it lives up to it!

Creature of the night.

Saw this little guy late one night, and couldn’t resist. My wife wasn’t too thrilled to learn that, instead of killing it, I took pictures of it. I disagree.

The history of Erâth can be defined by the passing of Ages. The Ages are not determined by a fixed passage of time, but rather by the predominant changes (or lack thereof) during that period, and the subsequent demise and ruin of those changes. In principal, the majority of Ages have lasted for around 3,000 − 4,000 years, placing the age of Erâth itself at some 30,000 years old. It is possible Erâth was in existence long before this, but given the lack of knowledge passed from one Age to the next, it is unknown if anything existed on Erâth during this period.

The events described in these books take place at the end of the Third Major Age, and in fact describe the ending of that Age and the beginning of the Fourth, and final, Age of Erâth. Many of the myths that impact the lives of these characters have their origins in the history of the Second Age, and the legends of the First Age. I will attempt to recount the development, major events, and downfall, of these Ages.

(i) Before the First Age

There were, in fact, no less than three Ages predating the First Age, but are […]